Transitions is a comprehensive homeless center in Columbia, SC. Founded as a nonprofit 501c3 in 2011, it had never had a successful fundraising campaign. After a full-day brainstorm with key people in 2017, we learned that awareness of Transitions and its mission was non-existent – people in the Midlands didn’t even know Transitions is way more than just a homeless shelter – and decided a total rebrand was in order before any fundraising could be successful.

The first step was phone interviews with 20 current and prospective donors, as well as hours of conversations with Transitions executive director, VP of development and case managers. What became clear was that though there are homeless “shelters” in the Midlands, none of them are like Transitions – a place where homeless people can go and live and do the hard work to get their lives back on track.

The second step was an updated logo and their first-ever tagline: “The journey home begins here.” The staff and board of directors loved both of those. We then proceeded to our first fundraising campaign, consisting of three print letters and e-blasts of the letters. Everything we have done since then – from the letters to the website and invitations to events – tells the story of “the journey home.”

Now in our third year, every campaign has increased not just the number and amount of donations but also recruited new donors. We are consistently testing our graphics and messaging to see what resonates. Admittedly, our task would be easier if our subject were pitiful rescue puppies or sick children. 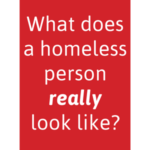 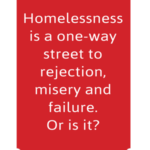 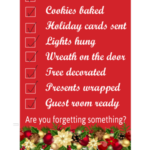 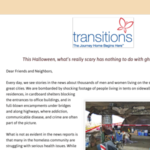 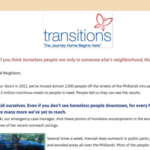 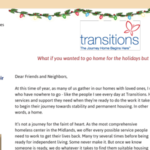